We’re very excited to release this new edition of Eclipse Phase (EP2). The first edition was released in 2009, won a number of awards, and quickly took its place as one of the top and most imaginative and detailed sci-fi tabletop RPG settings out there. Like any first-edition game, however, there was room for improvement. I’m going to take this opportunity to discuss the various changes we’ve made with this new edition and the thoughts behind them.

The character creation system has been simplified so that making a PC is faster. In EP1 we used a point-buy system that provided you with a lot of granularity over your character, but in EP2 we use a package-buy system for assigning skills that speeds up the process considerably (an option is provided for people who want to do it the old way). A handful of other steps helps you round out and customize your character. We also provide 16 sample characters for players that want to jump right in (more on them below). 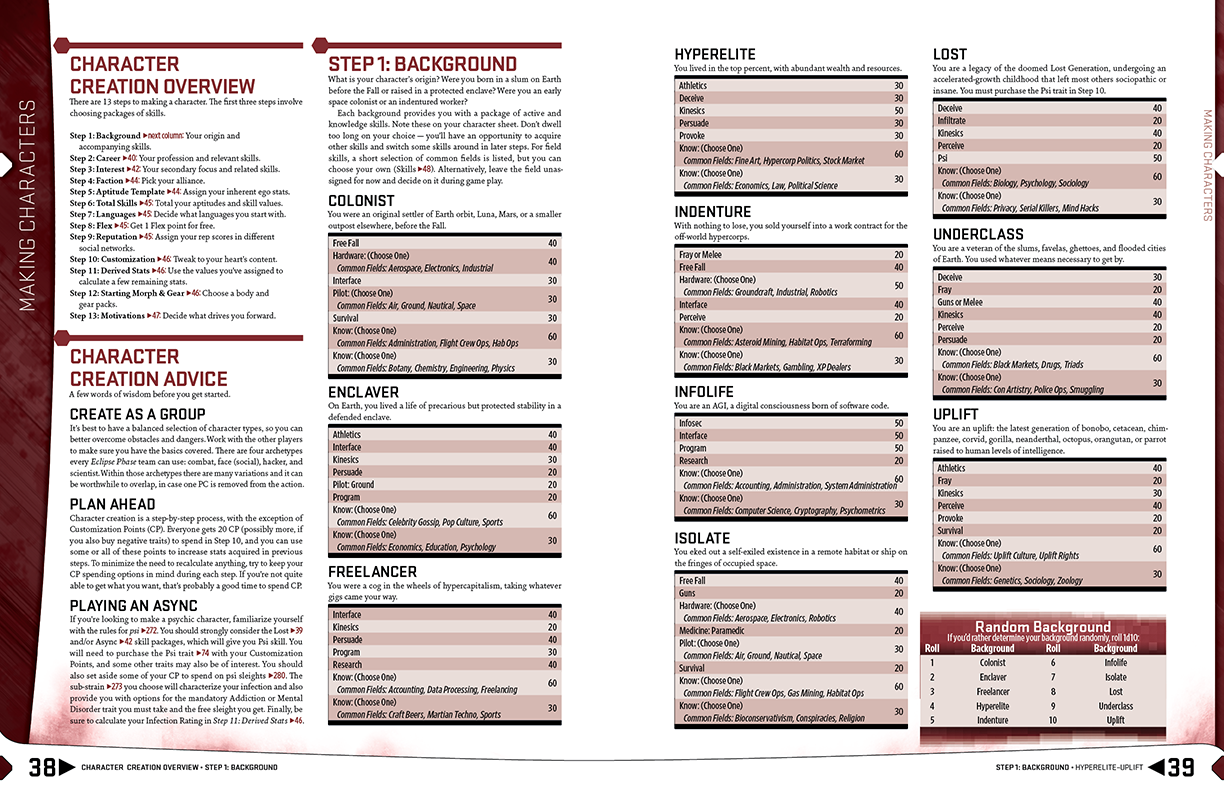 Perhaps the most significant change in EP2 is that resleeving into a new morph is now considerably easier. For people unfamiliar with the setting, in EP your character can digitally upload their mind (“ego”) and then download into a new body (“morph”) in a process called resleeving. In EP1, resleeving required you to adjust your skills depending on the new morph. In EP2, this is no longer the case. Your morph’s transhuman capabilities are now represented by a set of four pools unique to each morph. When you resleeve, you simply note your new pool points.

These pools are a core aspect of the new game mechanics. They function in a manner similar to how Moxie worked in EP1: they let you manipulate your dice rolls, either by adding or ignoring modifiers or by flip-flopping the numbers rolled (for example, making an 83 into a 38). Each pool applies to a set of linked skills: Insight for mental skills, Moxie for social skills, Vigor for physical skills, and Flex as a wild-card pool. Each pool also has a set of unique uses. You can, for example, use a Vigor point to ignore a wound effect, seize the initiative, or take an extra physical action in a turn. Insight and Moxie provide similar mental and social benefits. Flex points provide players with a bit of narrative control, such as introducing an environmental aspect to a scene, as long as it makes sense and the GM approves. 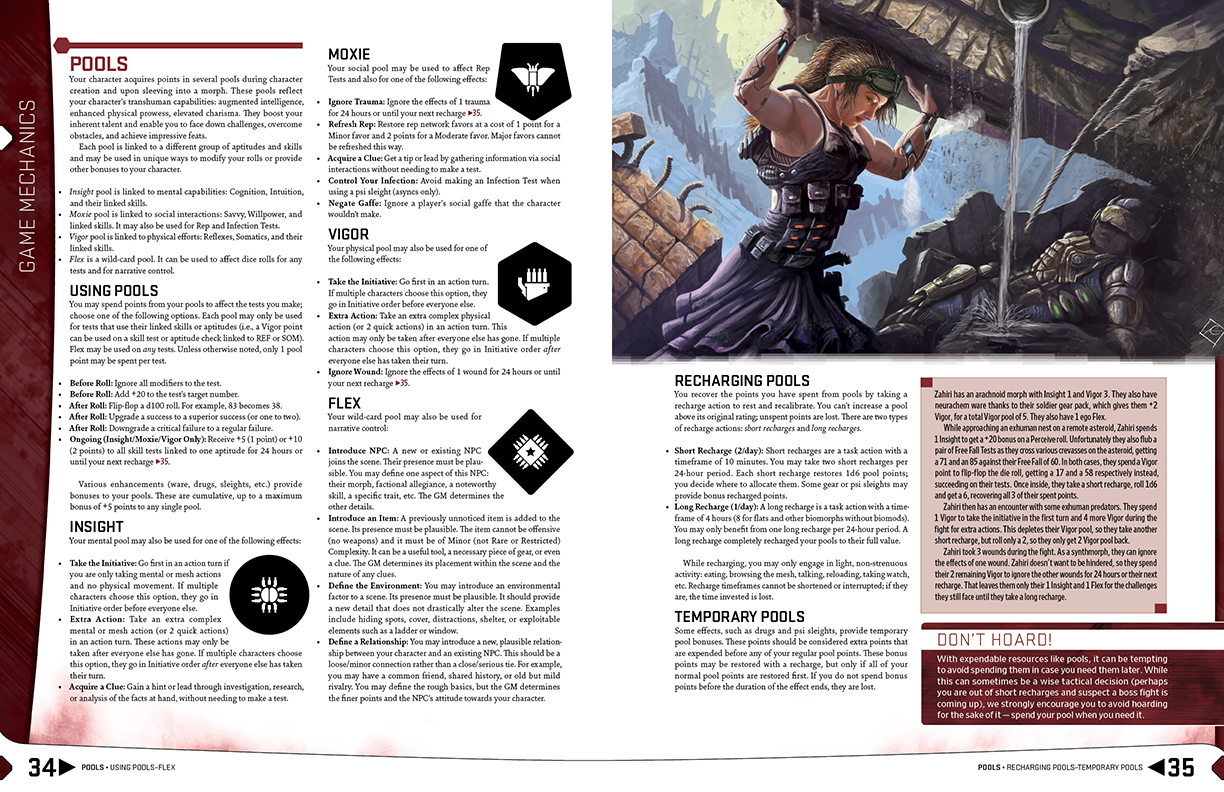 Along with the ease of resleeving, acquiring new morphs in game is now handled more abstractly. In short, the GM assigns a set of Morph Points to the PCs for each mission. These Morph Points reflect the resources available to the PCs. A job funded by an elite oligarch may mean you have more Morph Points to acquire higher-end morphs with better traits and augmentations. A mission run on a shoe-string budget means fewer Morph Points and cheaper morphs saddled with negative traits. A similar system of Gear Points applies for gear, and a set of pre-made gear packs allows players to acquire sets of job-specific gear without the need to spend a lot of time on in-game shopping.

Another significant change to the rules is that we revamped how asyncs work. In EP, asyncs are characters infected by an alien virus that gives them psychic powers. Our intent with asyncs was always to steer away from typical “psychic” tropes and make them more creepy and disturbing. In EP2, every async is infected with a particular sub-strain that gives their infection more specific character. One async’s infection might manifest as alien urges, another’s might register as a desire to create unconventional things, while yet another’s might be an insidious presence lurking over their shoulder and whispering in their ear. Each async now has an Infection Rating that indicates the virus’s current strength. The more you use your psychic abilities, the more powerful your infection gets, and the more likely it is that you will will be saddled with new motivations or enforced behaviors—or even that the infection may temporarily take over. The psychic abilities—called sleights—also were revamped, with more interesting and useful options. 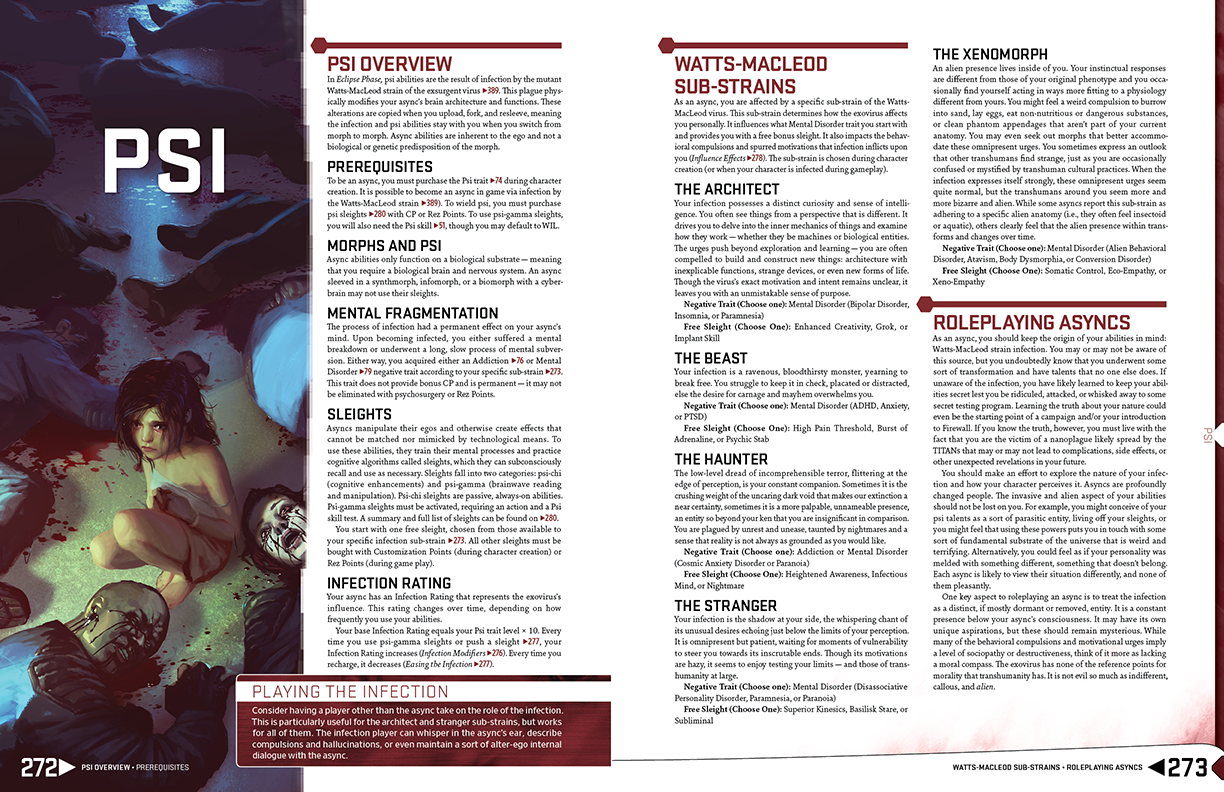 Beyond these major changes, the rules themselves went through a process of streamlining and simplification. The skill list was condensed to about half its previous size, weapon traits and various conditions are standardized, and the mesh rules are more clearly broken down and your options explicitly defined, among other things. Like before, you will find rules for handling almost every aspect of the transhuman setting, from forking (making multiple copies of yourself) to handling alien environments to psychosurgically altering your own mind.

Very little of the game’s fictional setting has changed. For the most part, we restricted our changes to fixing the science with a few things. For example, we relocated the space elevator on Mars from Olympus to Pavonis Mons (a better candidate) and brought the ninth planet, Tyche, in a bit closer, according to where such a planet is more likely to be in real life. EP2 takes place at the same time as EP1, 10 years after the Fall. 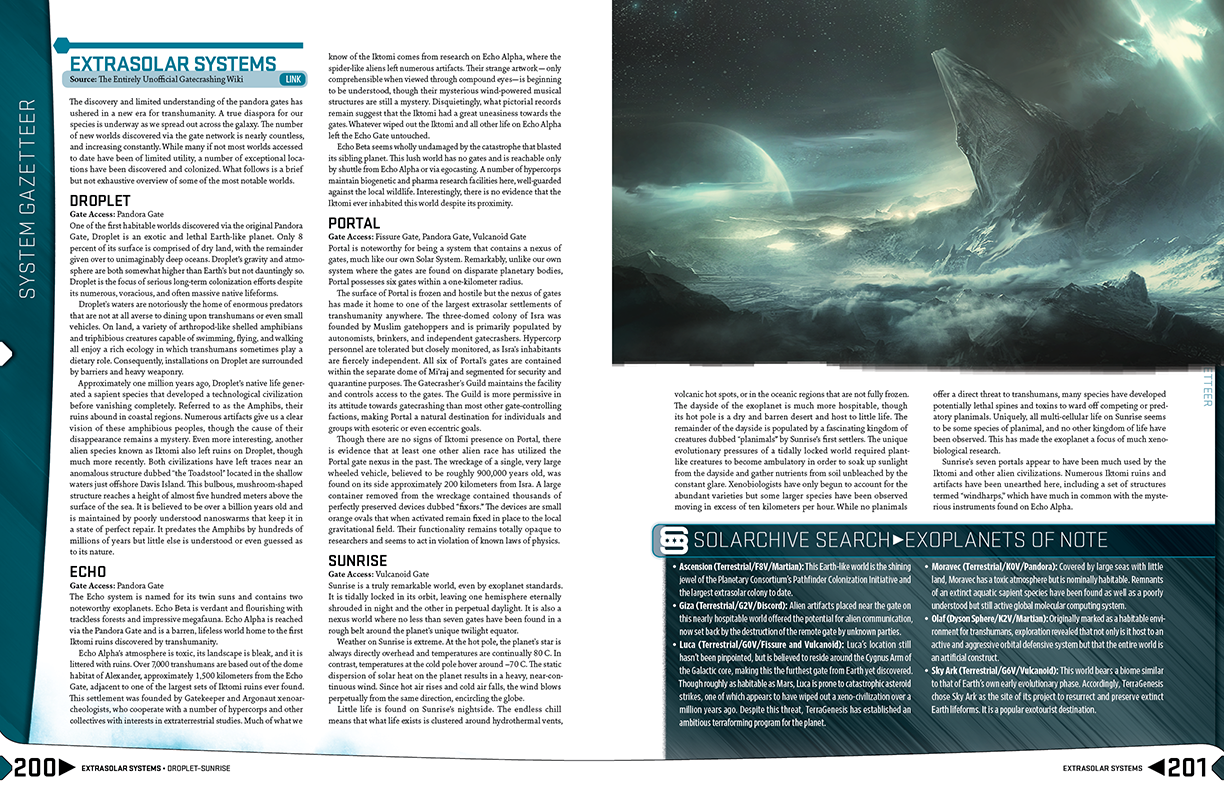 A few of the factions introduced in EP1 have changed. We never did much with the nano-ecologists, and so these were removed. Since we moved the Ultimates in a more distinctly fascist direction in various sourcebooks, we no longer emphasize them as a player faction, but we did also introduce a splinter group from the Ultimates that is less authoritarian for the folks still interested in playing them.

One of our main intentions with EP2 was to organize information in a more efficient manner. To this end, the book adopts a more magazine style of layout, with the intent that almost every two-page spread encapsulates what you need to know on that topic. This minimizes page-flipping and the need to search for information elsewhere in the book. 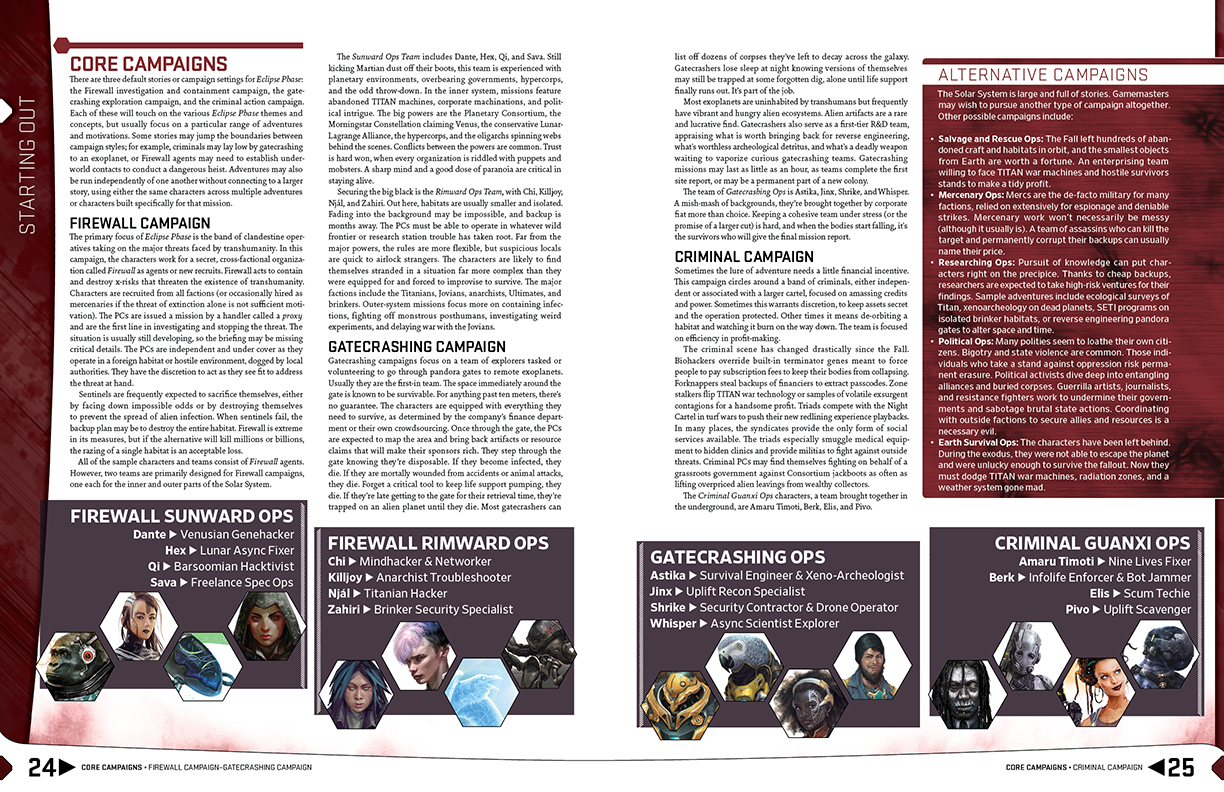 Like in EP1, we’ve also incorporated a number of visual aides for navigating the book. Rules pages are red, source material sections are blue, and every page has edge navigation to mark the chapters and text elements at the bottom that list the range of headers covered on that page.

The books also feature a heavier paper stock, a smyth-sewn binding that should keep it long-lasting, and two bookmarks to mark your place.

The digital PDF version is fully bookmarked and hyperlinked, like all of our releases.

Finally, this book features an assortment of high-quality art from some killer artists. Really, it’s fucking great. We’re really pleased with how it came out.

As noted above, we provide 16 pre-generated characters so that you can jump right into the game. However, we also took this farther: the sample characters are sub-divided into four teams of four characters each. Each of these teams is designed to operate as a Firewall cell, which is the default campaign setting. One is specifically tailored for missions in the inner system, and one the outer system. The third team is focused on gatecrashing operations, and so can also be used for a campaign focused on extrasolar exploration. The fourth team is designed for criminal operations and crime-focused campaigns. If you have more than 4 players, you simply grab an extra from one of the other teams. 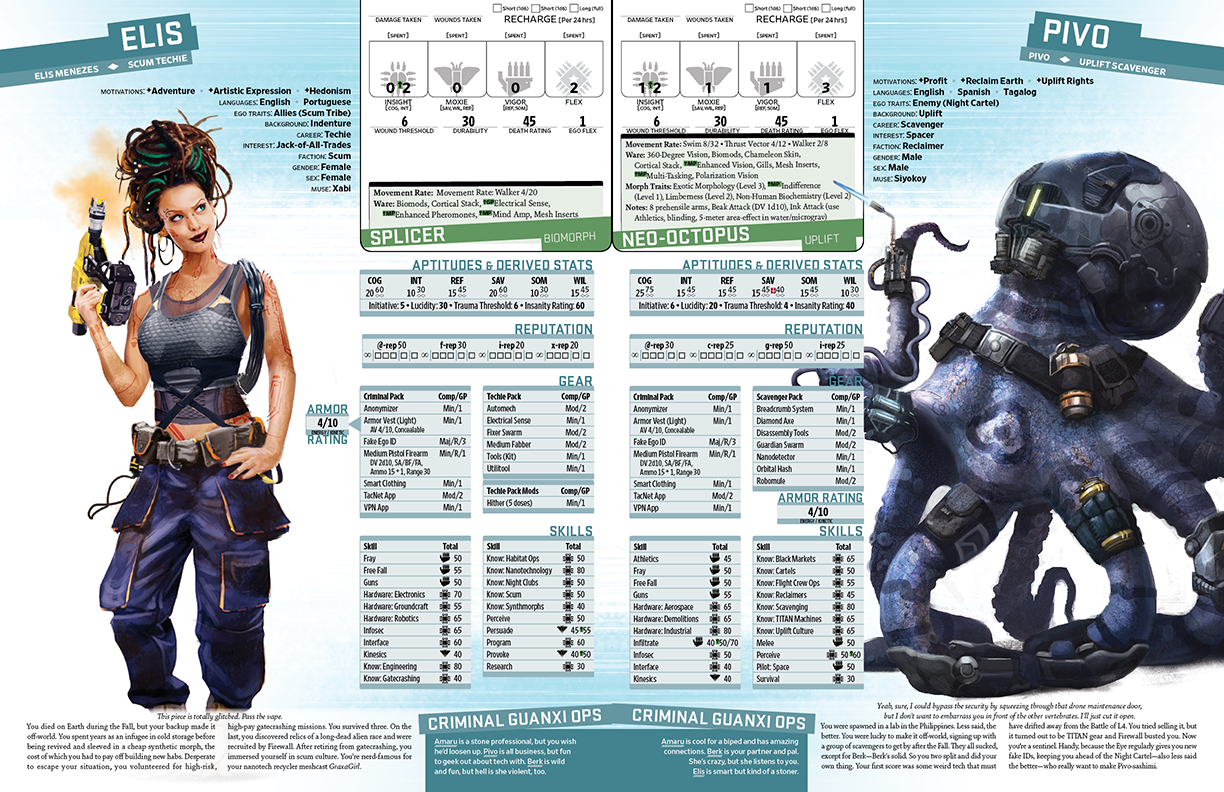 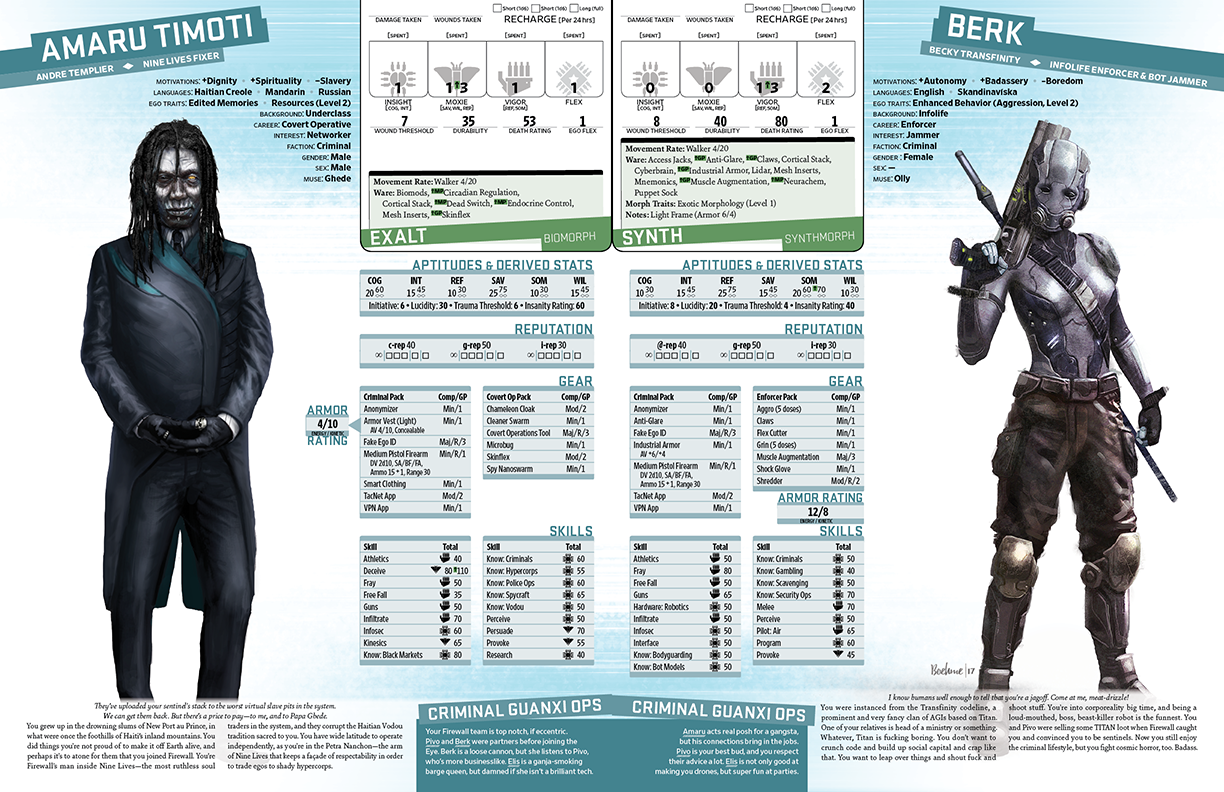 ?If you and/or your players are new to EP, the book has some material for helping you get started. The What is Eclipse Phase spread on pp. 18-19 provides at short summary of the setting for newbies, and the rest of the Starting Out chapter (pp. 18-29) is packed full of info to get you started, including core concepts, themes, character types, and settings. Since the EP setting is very detailed, we are aware it can be a bit overwhelming for people who are previously unfamiliar with transhuman concepts. To that end, we provide some GM advice on easing your players into the universe and setting up the first game in a way that doesn't drown your players in information. You can read those sections here. 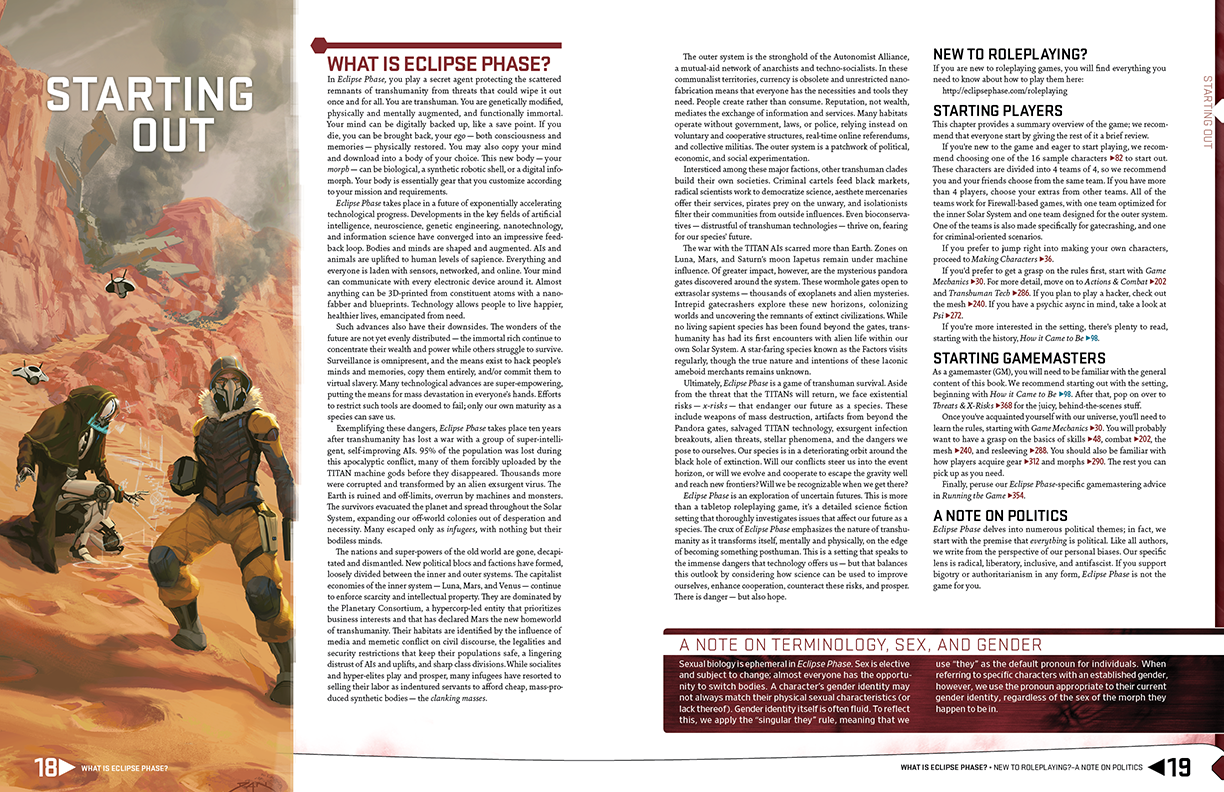 Though EP2 and EP1 are similar systems, there are some compatibility issues. The primary issue is that the morphs have changed; however, it is not difficult to apply the new morph stats to a situation. The skills of PCs and NPCs will take some effort to convert, as they have been reduced to about half.

What this means is that a few of our previous releases are to one degree or another invalidated by the new rules: specifically, Transhuman and the Morph Recognition Guide. X-Risks also falls into this category, though it would not be that difficult to convert the various threats and critters it lists (a number of these are already included in EP2). All of the adventure scenarios we have published for EP1 would also require some conversion effort. We do plan to release EP2 conversions for these down the line.

The majority of our sourcebooks, however—Sunward, Rimward, Gatecrashing, Panopticon, and Firewall—are 95% source material and thus very much still useful to an EP2 campaign. A few of the rules in the Game Information sections in the backs of those books will no longer apply, and any sample characters would need conversion, but that’s it. We will be using the term “SolArchive” to refer to EP1 books that we still recommend for EP2 games.

As with EP1, the new edition is released under a Creative Commons BY-NC-SA license. This means that you can share the digital book and make and share your own free Eclipse Phase compatible material according to the terms of the license, though we of course encourage people to buy our PDFs and other digital offerings so that we can continue to make stellar games!

Ready to Dive In?